The NQVP comprises seven partially contiguous to non-contiguous Exploration Permits for Minerals (EPM) covering approximately 1,250 km2. In October 2021, Currie Rose entered into a purchase agreement with Liontown Resources Limited and CGM Vanadium Pty Ltd to acquire a 100% ownership of the seven exploration permits that comprise the NQVP. The acquisition agreement is subject to a 2% Net Gross Revenue Royalty, 50% of the Royalty can be purchased by Currie Rose by making a payment of $AUD 1,000,000, in cash. 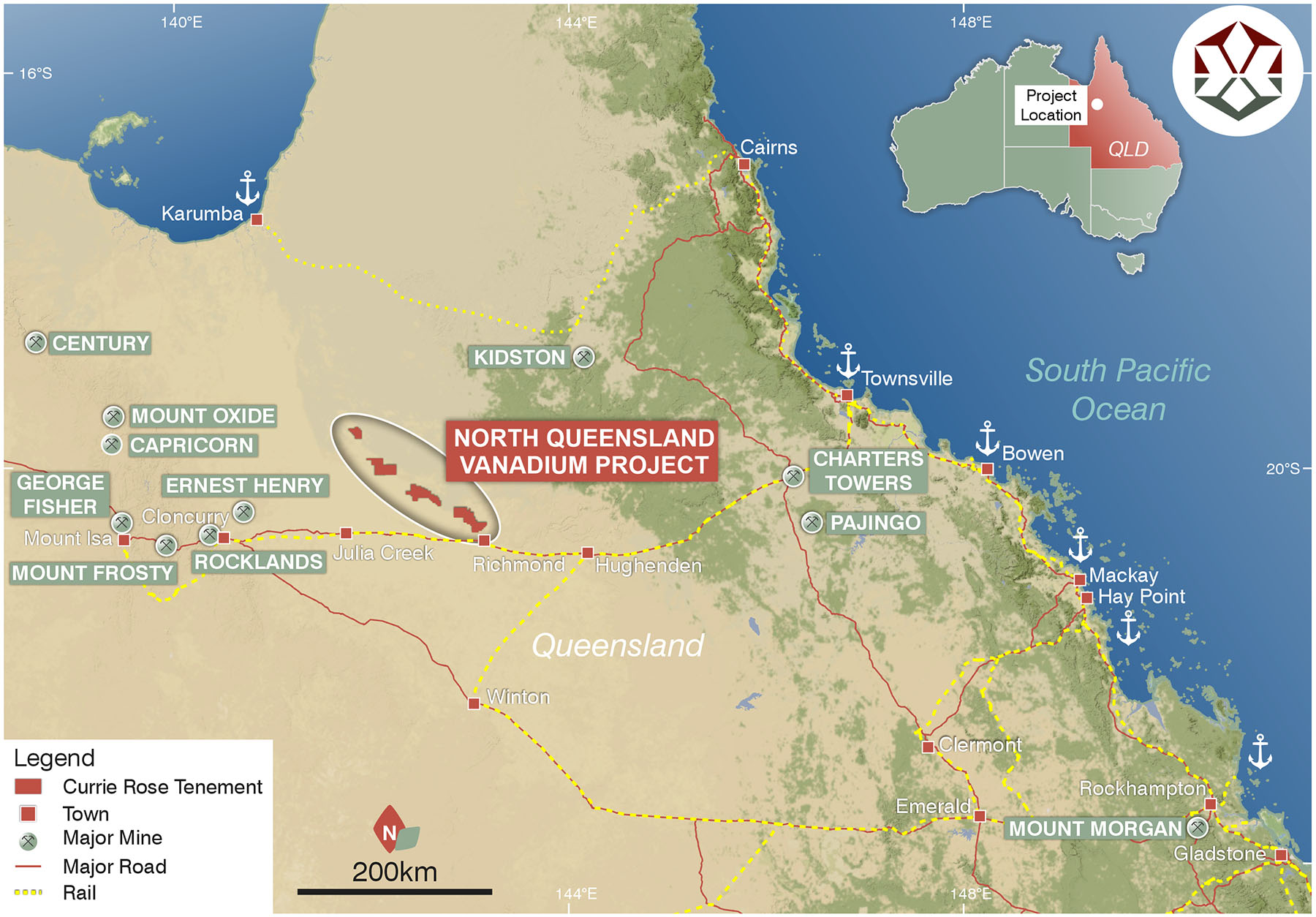 The North Queensland Vanadium Project is located in northwest Queensland, Australia, along the Flinders Highway between Julia Creek and Richmond. The Property is situated approximately 500 km southwest of the port city of Townsville.

Exploration in the Julia Creek-Richmond area was initially focused on hydrocarbons in oil shale, however the focus has shifted to vanadium exploration over the last couple of decades and the region transformed into Australia’s vanadium hub, enjoying large support from the government, including an AU$10M funding package to design and construct a dedicated vanadium common user pilot plant scheduled for commissioning in the second half of 2023.

The Property lies within the Mesozoic Eromanga Basin. The Project area is largely underlain by sediments of the Lower Cretaceous Rolling Downs Group which includes the Toolebuc Formation. The Toolebuc Formation is the main host of the vanadium mineralization in the area.

The Toolebuc Formation is a flat-lying, laterally extensive sedimentary unit that consists of black carbonaceous and bituminous shale, minor siltstone with limestone lenses and coquinites. Vanadium mineralization in the area has been documented to extend for several kilometers along strike, as found at the Lilyvale deposit adjacent to the NQVP and the Cambridge prospect on the NQVP.

Past Exploration and Historical Results

Significant historical drill programs that overlapped the NQVP Property and targeted the vanadium mineralization were completed by Pacminex in 1973, Jacaranda Minerals in 2007, Intermin Resources/Horizon Minerals (Intermin/Horizon) between 2006 and 2013, and Liontown Resources and Chalice Gold Mines (CGM Lithium) in 2019-2020. In total 270 historical drill holes are located on the Property.

In 2018, Liontown commissioned Optiro Pty Ltd. (Optiro) to generate a mineral resource estimate (MRE) for the Cambridge vanadium deposit which is located on EPM 26494.

The Cambridge vanadium deposit is adjacent to and immediately east of the Lilyvale vanadium deposit owned by Richmond Vanadium. The Cambridge deposit has been delineated over an area of 5 km by 3 km. The mineralization is hosted by the Toolebuc Formation which extends from surface to 22 m below surface and ranges in thickness from 2 m to 17 m, with an average thickness of 9.7 m. The Cambridge inferred MRE contains 83.7 million tonnes grading 0.30% V2O5 (vanadium pentoxide) including 188ppm M0O3.

The MRE is now considered historical in nature as the additional drilling completed by Liontown in 2019 was not included in the 2018 Optiro MRE and the MRE was not constructed on behalf of Currie Rose.

Subsequent drilling in the area has confirmed historical results and expanded the extent of known mineralization in the area of the Cambridge deposit. 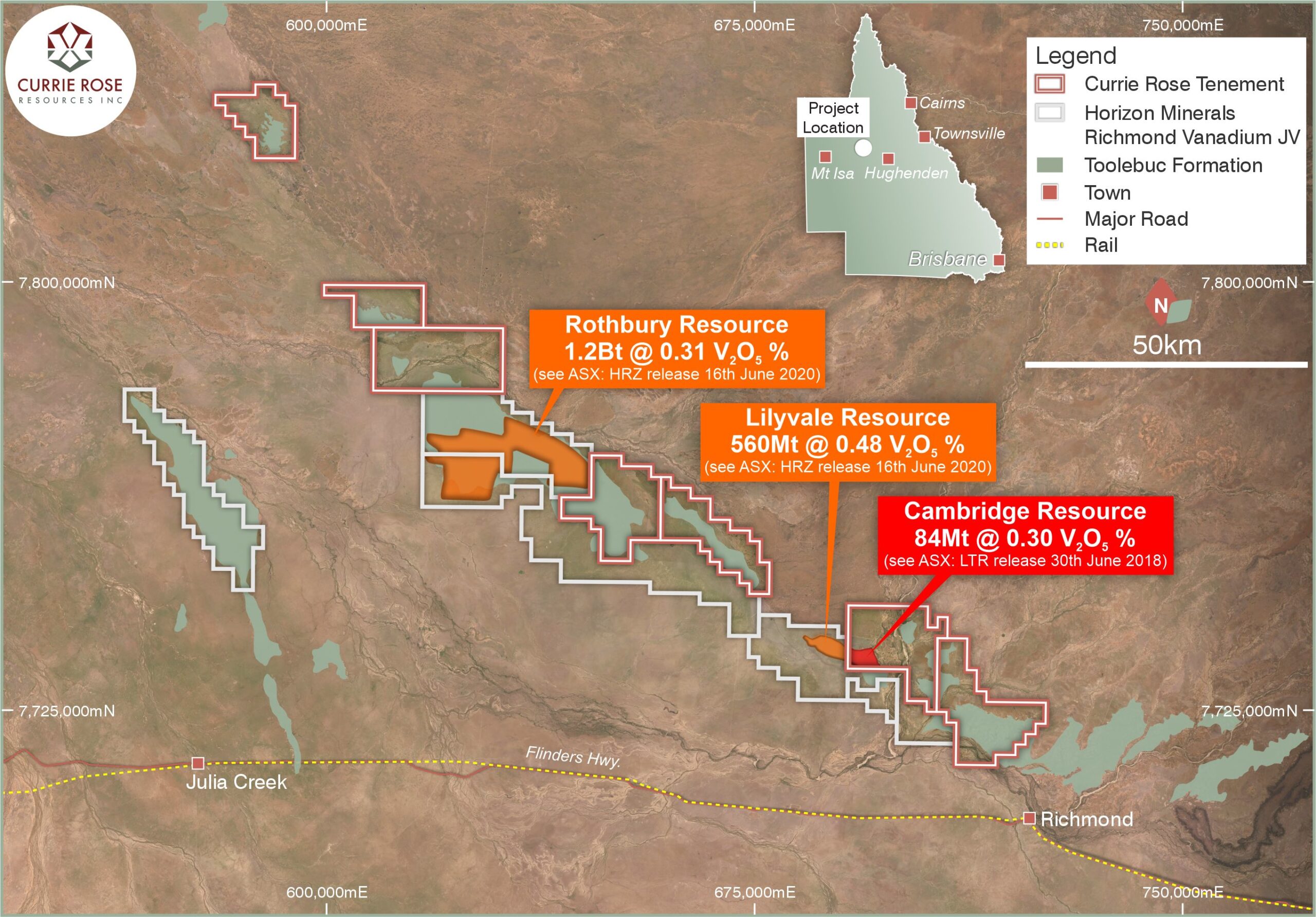 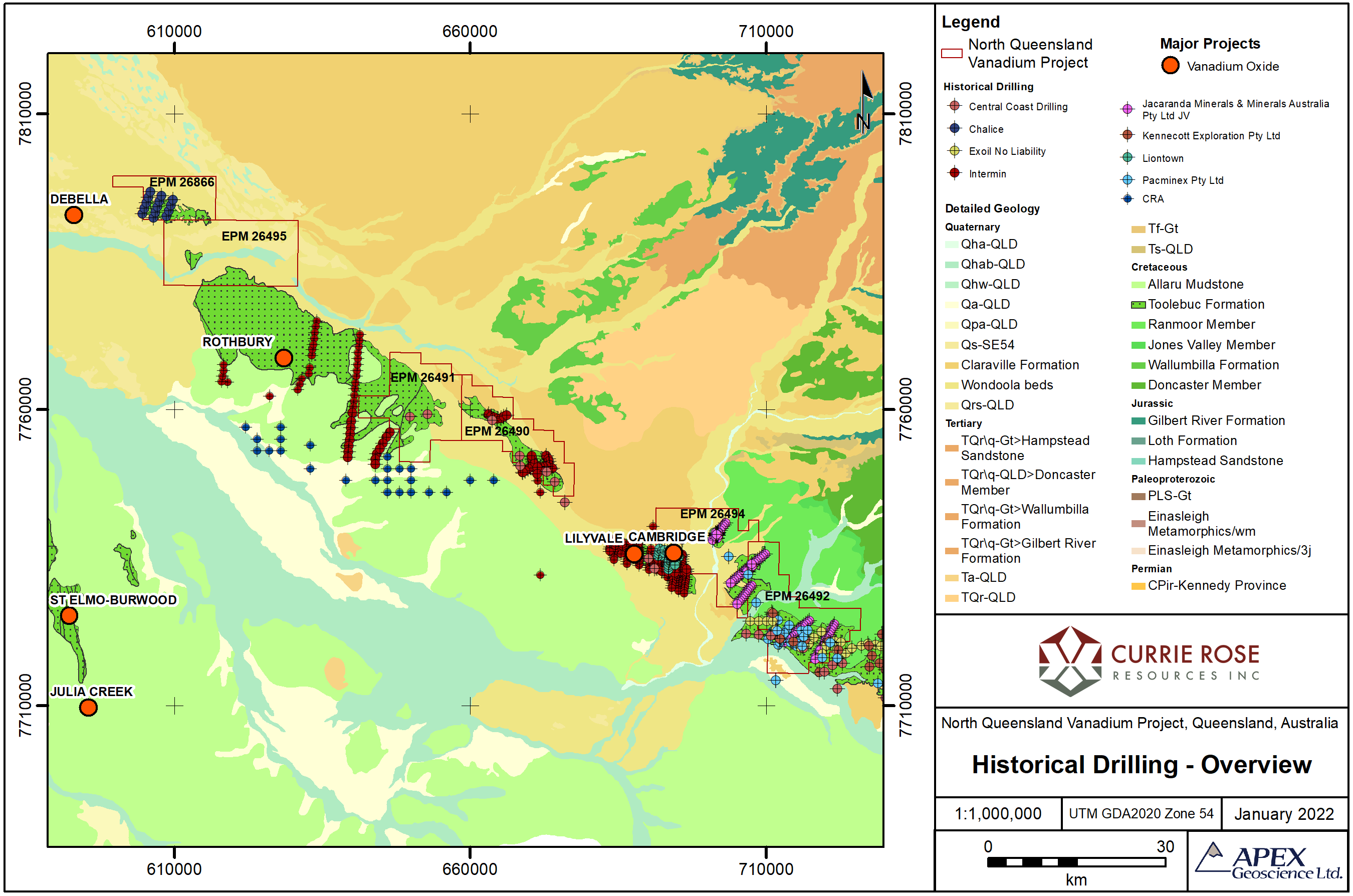 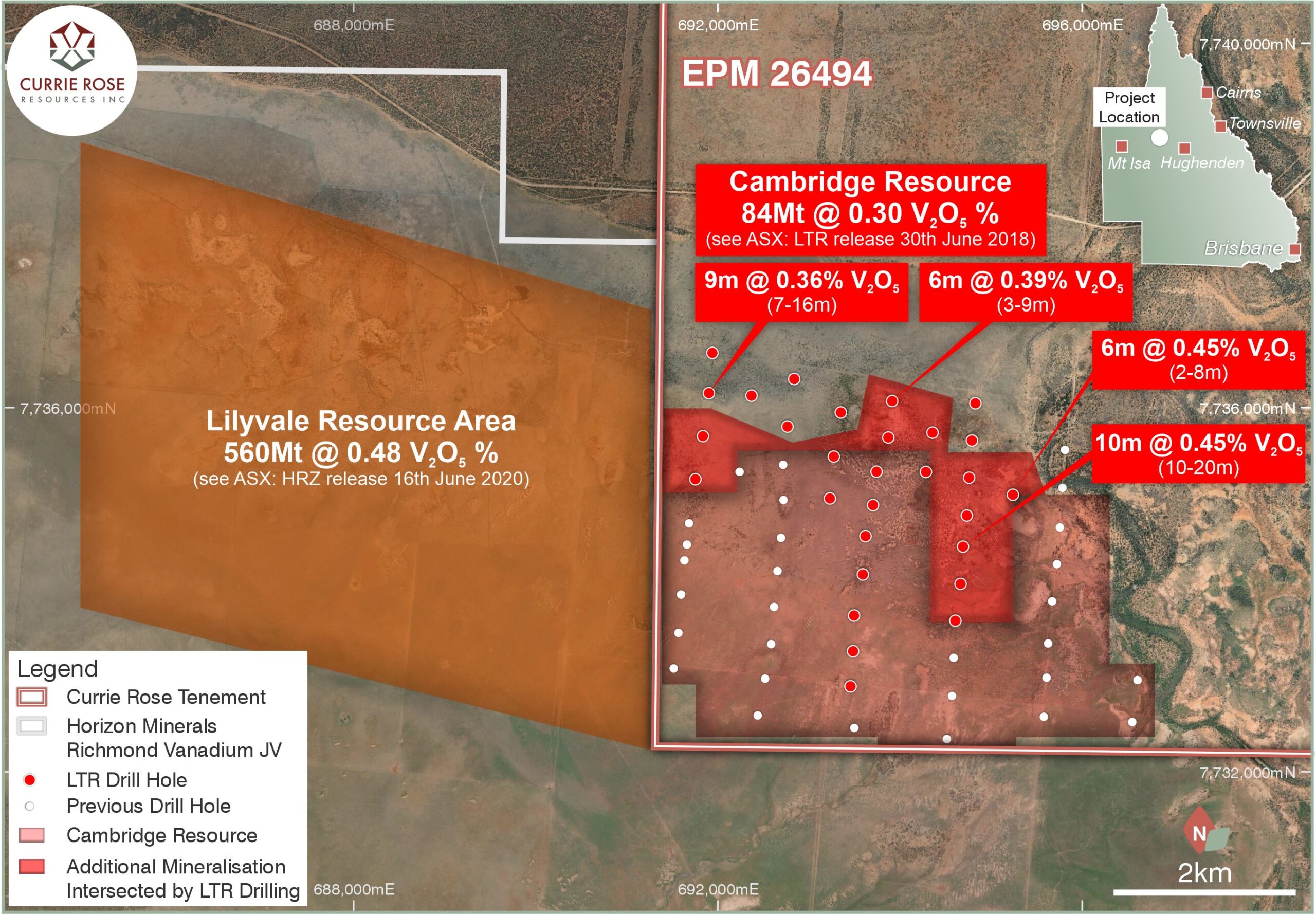 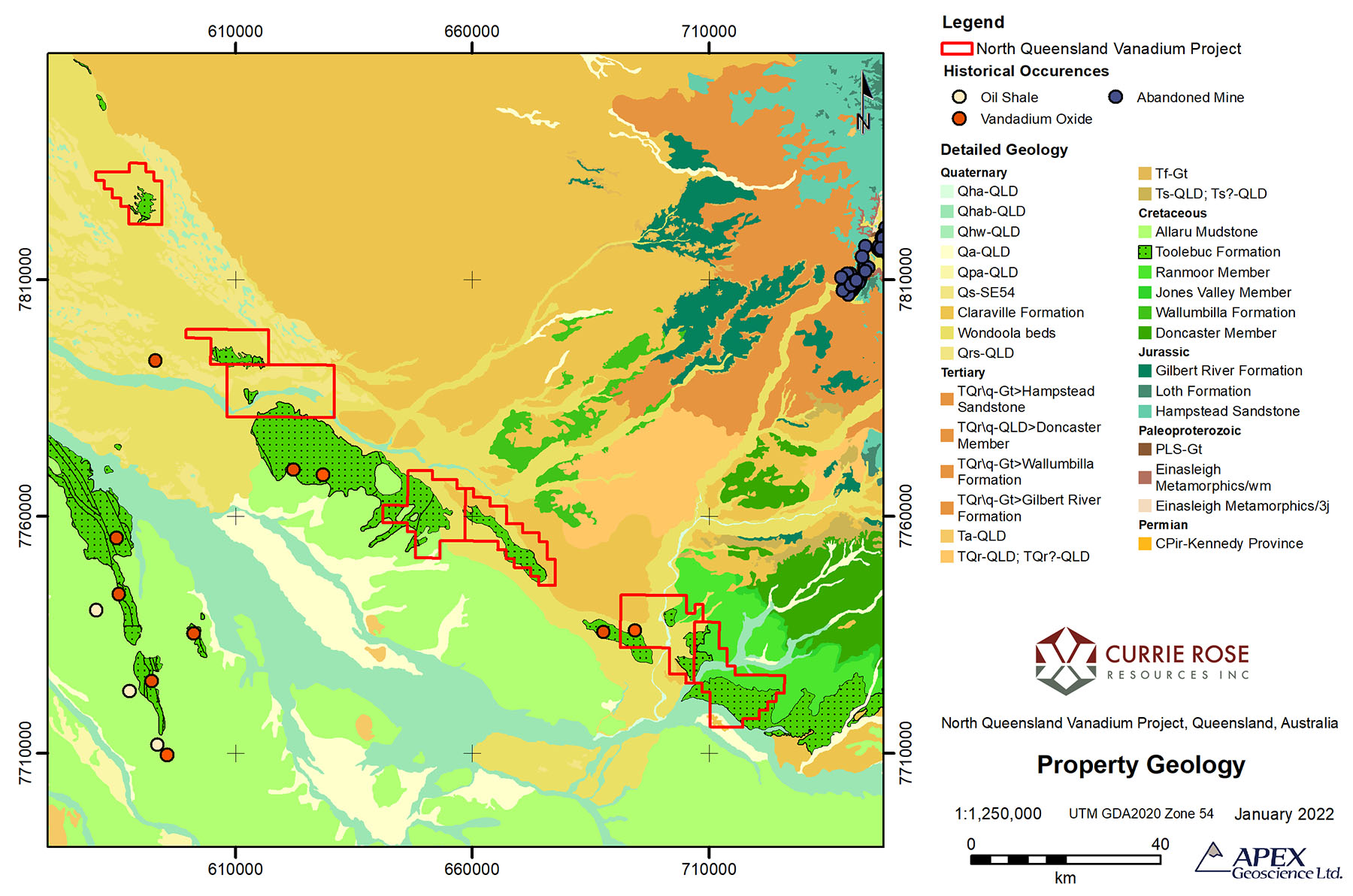 Additional areas with historical drilling that require follow up work include the Flinders River area on EPM 26866 where recent drilling has identified an area of extensive vanadium mineralization that is open to the east. Follow-up exploratory and confirmation drilling should be completed leading to an initial MRE if warranted.

Historical drilling in the Runnymede area (EPM 26490) defined the presence of shallow vanadium mineralization over a 3.5 km by 3.5 km area. Follow-up drilling is planned.

High-priority drill targets have been identified at the Silver Hills area (EPM 26492) based on the historic drilling results and surface sampling.

Additionally, large areas of the Property remain unexplored where the outcropping Toolebuc Formation has not yet been assessed for vanadium mineralization. Reconnaissance exploration to assess these areas is planned.

Exploration in the region has identified considerable mineralization in the Toolebuc Formation Rocks.

Updated Cambridge Resource Estimate, released in November 2022, was based on 65 drill holes, using 30 drill holes not included in the initial 2018 resource.

The North Queensland Vanadium Project has multiple characteristics that are positive for potential future development. These include:

Expanding existing Mineral Resources with the addition of new drilling